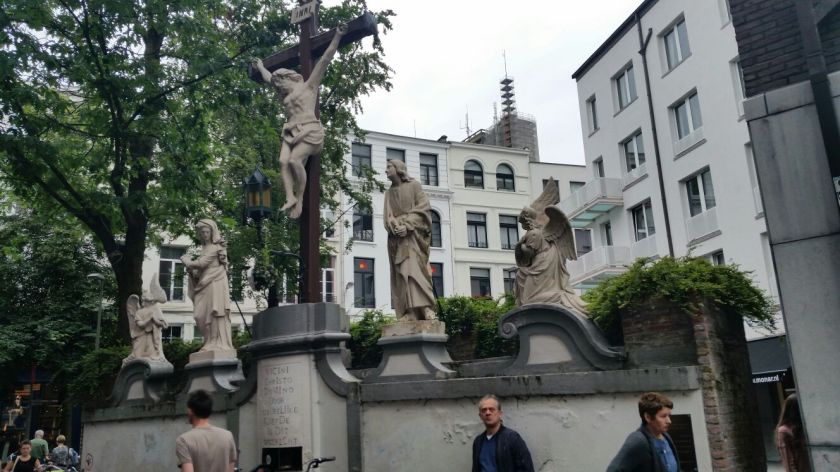 Some simple notes of this place…It was only 6 Euros to get in. The Cathedral is a very holy place…noted for being one of the best in Europe for its historical ambiance. It is a UNESCO  World Heritage Site, a Roman Catholic cathedral, started in the year 1352…wow. That’s old!

The Cathedral of Our Lady contains a number of significant works of art by the Baroque painter Peter Paul Rubens as well as paintings by artists Otto van Veen, Jacob de Backend, and Marten de Vos. The church also features significant architectural details, such as the spire which measures 12 meters. It is the highest church tower in the Holy Roman Empire.

Napoleon compared the spire to “Mechln lace,” the best known Flemish lace. It is fine and transparent and looks its best when worn over another color, think velvet. Deep and rich colors can be found here in the tapestries.

Some of the other history of these fine works of art are that these pieces were confiscated by Napoleon and moved to France, then later returned in the 19th century.

More facts to get an idea of the size of this place.

Incredible to say the least…all expressions to Mother Mary for her love and sorrow. This cathedral is also an active Parish (a place of worship).

I did light  a candle for all my friends…past and present…who help me and believe in me. All this light and stone tells many stories.

It is Saturday and I been seeing a lot of people dressed for wedding celebrations, especially around the Cathedral. My favorite one this morning was when I saw this gentleman deliver his bride to the church in a bike basket…it was really touching and romantic. Sweet.

I will write more later, but right now I am going to look for the Botanische tuin. I think that they have the gardens that I need for inspiration for the Belgium part of my future coloring book. PEACE.

I found the gardens after going too far…I had to turn around. But, all in all, it was worth  the walk in this city. A kind woman on the street helped me out; I’m sure I must have looked puzzled. I was having trouble reading the map (since all the legends were written in Flemish. I was not being able to find the street signs on the map to figure out where I was. Some of these old cities in Europe have very confusing streets that wind around. Not to mention that I can’t even pronounce  them.

Being here in the stunningly beautiful city of Antwerp reminds me of all those foreign films I’ve watched; now I’m living in one. I took a lot of pictures of flowers to illustrate (at a later date) along with their names.

Afterwards I stopped by a store called K2, named after the second highest mountain in the world (Mount Everest is the tallest) near the border of China and Pakistan. K2 is an outdoor store that is probably equivalent to REI back in the United States. This is the first outdoor sports store I have found since being here. I bought  a headband to keep the hair out of my face when I walk. Red is the color this week for the Belgium soccer team, playing in the Europe UEFA EURO 2016 games. Soccer is VERY big here…like our football playoff games. Actually, it’s more like our Super Bowl. It’s a really big deal!

I walked back towards the church and picked up a salad to eat for a late lunch, early dinner. I sat under a tree and simply enjoyed just watching the Saturday crowd. Next to me was a Visitor’s Center so I stepped in to see what I might be missing in thus great town. I picked up some postcards to send back home. Fashion is big here…the look of really incredible sophistication…I did see a older woman, probably  in her late 70s, wearing  a very high heel red shoe…she looked incredible, maintaining her balance with such grace and style.

I rested afterwards to charge my phone then went out again. Then the sky opened up and a downpour drenched me, again. That seems to happen a lot on this trip through northern Europe in early summer. It makes me wonder if there might be a better time to do this tour next time. I stopped at a few places but felt like a undecided voter.

I made my way back to a cafe and got a glass of French wine. I was eavesdropping on a conversation at the table next to me and the waitress informed me that it has been the wettest June in 200 years. All these years are rounded up by the 100’s…which brings a big grin to my face.

I miss my family.

I am feeling wet and cold…surprise, surprise…and I think I may need to retire for the evening soon.

Sometimes I feel so tired by the time I get to this blog it’s no wonder I may seem a little messed up. Thanks for bearing with me.

At the hostel in Antwerp I met this lovely young lady from England (we shared a room) Her name is “Sam” for Samartha. She was a delight and a happy adventurer on a journey of fun. Her boyfriend was teaching English in Thailand.

We have been in the same hostels three times…Rotterdam she didn’t care for…I liked the city and its WWII history. The city of design…she said she would follow my blog and I told her to check out Iris’ “Iris in Indonesia” blog on WordPress.com because it is written so well.

We said, our goodbyes and wished each other “All the Best”.